The Illawarra Kung Fu Academy teaches a system called Lohan Qi Gong (pronounced “Chee Goong“). Tai Chi has come to be a generic term in the west for any of the many forms of moving meditation based in the ancient martial traditions of China. Other styles of Tai Chi, and all styles of Shaolin Kung Fu, share at their core the components of Lohan Qi Gong.

Qi Gong is of enormous benefit to everyone, of any age. Just some of the benefits of practice are:

And improvement in symptoms of arthritis, high blood pressure, multiple sclerosis, Parkinson’s, Alzheimer’s & Fibromyalgia, among many other benefits.

Practice can reduce the risk of falls in both healthy elderly patients and those recovering from chronic illness. It can also greatly reduce pain and improve overall physical and mental health. Of course, prevention is better than cure and the practice of qi gong is incredibly beneficial for young people, helping to prevent the onset of many age-related conditions and greatly improve quality of life.

In studies, practitioners did significantly better in terms of pain, fatigue, sleeplessness and depression than a comparable group given stretching exercises and wellness education.

The Chinese believe everything in nature can be classified as either Yin or Yang, a concept which describes the opposing aspects of an object or natural phenomena.  Everything can be divided into these two complementary  opposites, the negative and the positive, the female or the male, the soft and the hard – all these are complementary  opposites.  However, nature does not stand still.  Summer progresses to winter, day becomes night, movement becomes stillness. Yin and Yang illustrates the complementary  relationship between opposite aspects, the transformation from one to the other, and the mutually controlling cycle of change.  Traditional Chinese medicine also uses the concept of Yin and Yang to explain and diagnose illnesses. Simply speaking, health conditions can arise either from an excess or deficiency of Yin or Yang in the body. The life of every organism depends upon the correct balance of its various components. Various internal and external factors disrupt the natural balance and harmony in the body. Imbalances can lead to physical and mental illness such as stress and anxiety, low energy levels, exhaustion, and poor health.

Created over 1500 years ago, developed and passed down through the ages, Lohan Qi Gong is an ancient Chinese natural therapeutic practice that consists of a variety of breathing, meditation and moving exercises. These practices are designed to exercise the physical aspects of the body, increase circulation of oxygen, nutrients and vital fluids, improve immunity and relax the nervous system producing a balance of mind, body and energy.

So what does the word Qi Gong mean? How do we translate it into English?  In everyday life, Chinese use Qi to describe the air we breathe, the weather, a person’s emotions, one’s life energy or spirit. In Qi Gong, Qi is a broad term that describes the base component of everything in the universe – an invisible force – that gives life or compels things into action or interaction. In the body, Qi can be used to describe the physical nature of the body, the cells, the groupings of cells that make up tissue, bone and muscle. It also refers to the spark of life, the functions that keep us alive through processes like respiration, digestion, and many other processes necessary to maintain our existence and bodily functions. The maintenance and effective regulation of Qi is vital to one’s wellbeing. The Gong in Qi Gong is the same word and meaning as the Kung in Kung (Gong) Fu.  It refers to the discipline, dedication and determination to master something. So Qi Gong, as a broad concept, is the mastery and cultivation of one’s Qi.

As an exercise, Qigong is a combination of soft gentle movements, conscious breathing and mindfulness practices that can help us re-establish and restore balance in the body. The Chan family Lohan Qi Gong system allows practitioners to learn easy to follow practices and also explore it’s inter-relationships with Traditional Chinese Medicine concepts.

The practice is not just about living to a ripe old age. It is about living in the best possible physical shape, both inside and out, as well as in peak mental and emotional form. 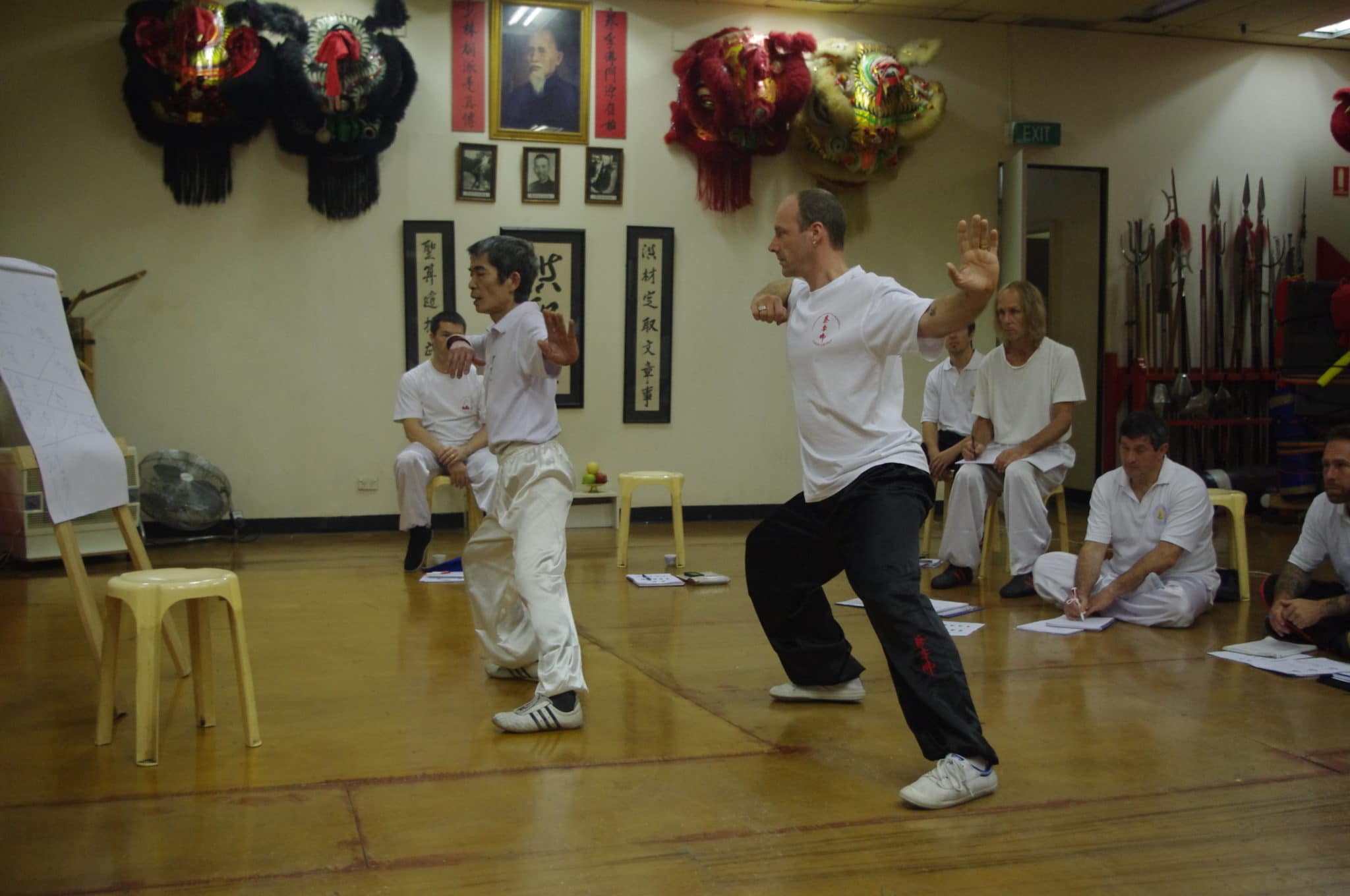 At the start of a new term, classes begin back at the basics and build up throughout. If you prefer to start slow, come at the beginning of a new term, but these are ongoing classes, with regular repeats and revisions so feel free to come along and join in any time.

Feel free to use the CONTACT Page if you have questions about any class.

The history of Lohan Qi Gong:

Lohan Qi Gong is the ancient healing exercise created by Da Mo (Bodhidharma), the founder of Chan (Zen) Buddhism, 1,500 years ago. This gentle exercise is relaxing and energising at the same time, with each set of movements designed to activate and cleanse the dan tiens and particular acupuncture meridians.

This exercise was a precious secret kept within the Shaolin temple until its sacking and the massacre of its inhabitants about 200 years ago. The monk Choy Fook, one of the few survivors, fled south to Guangdong province, and was sought out by Chan Heung who became his disciple. Chan Heung mastered the whole system of Shaolin kung fu including the Qi Gong exercises and medical knowledge, which has then been passed from generation to generation through his family.

When Chan Heung became a disciple and received his training from Shaolin Monk Choy Fuk, which ultimately lead to the creation of the Chan Family Choy Lee Fut system, he not only received a vast training and theoretical knowledge of Kung Fu, he was also passed on a vast knowledge and training in the Lohan Qi Gong therapeutic exercise system, and also received extensive training in Traditional Chinese Medicine, in particular the art of “Dit Da”, which is essentially Chinese Bone Setting and management of traumatic injuries, a specialty within Chinese Medicine that has long been associated with the Shaolin Temple.
Of course this knowledge was useful for disciples training in combat arts resulting in frequent injuries occurring as part of their rigorous training, enabling them to treat themselves and each other, however, more importantly, the practice of Lohan Qi Gong therapeutic exercises is infused with the principles of Chinese Medicine theory, and knowledge of Chinese medicine thus greatly enhances the practices, providing greater and more profound insights into the therapeutic nature of the qi gong practices, and is a logical extension of the healing aspects of Lohan Qi Gong.
Also, practice of Chinese Medicine gave Choy Lee Fut practitioners a way to contribute and benefit their local community by providing treatments to those in need, especially during an era where medical services were scarce. This has always been an integral part of the Chan Family system and is demonstrated by the fact that not only did Chan Heung open a Chinese medical clinic in his village of Ging Mui at the completion of his training with Choy Fook, but also current Grandmaster, 5th Generation Direct Descendent and Keeper of the Style, Master Chan Yong Fa, is a full time Chinese Medicine Practitioner with a busy clinic in Sydney’s Chinatown. Master Chen is Sifu Alan’s teacher.
The Chinese Medicine component of the Chan Family Choy Lee fut system incorporates medical massage, cupping, moxibustion, acupuncture, dietary therapy, and herbal medicine.

There are several Lohan Qi Gong sets forming a comprehensive system of progressively more advanced techniques towards gaining complete mastery of ones Qi, or vital energy.

Legend has it that the Buddhist monk, Da Mo, spent nine years in meditation in a cave. During these years of meditation he discovered that the lack of movement of his body and limbs over a long period of time, plus the bitter cold and wind around his mountain retreat, caused fatigue, body aches and pains. His disciples also suffered the same problems and often dozed off during meditation. To combat those hazards, Da Mo devised a set of exercises based on Indian yoga exercises, Chinese exercises of the time, and his observations of the natural movements of wild animals. This set of exercises is known as the “18 Lohan Qi Gong”.

During the Yuan Dynasty the “18 Lohan Qi Gong” (consisting of 18 movements) was enlarged to 72 movements, and later still to 173 movements to form the basis of Shaolin Chuan Fa, which in turn, greatly influenced the developments of all branches of Asian fighting arts. For the martial arts student it is essential to appreciate that Lohan Qi Gong is not just another Chinese exercise; it is the original “blueprint” for Shaolin Kung Fu.