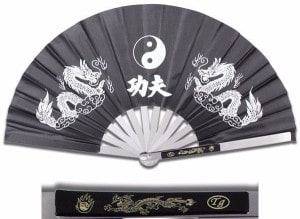 As we have a seminar coming up in June for the fighting fan, specifically the two-person Sui Sau Sin, or Hand Breaking Fan, I thought Iâ€™d write a few quick words about the fan as a weapon.

Firstly, and most importantly, the fan is not to be under-estimated as a weapon. Its greatest strength is its seemingly benign nature, nothing more than a small device for keeping cool, but it is one of the most deadly weapons in the Choy lee Fut arsenal, and one of the hardest to master.

Part of fighting with the fan is knowing and attacking the vital pressure points of the opponent. For this reason, an understanding of Chinese medicine theory, meridians and acupressure points is essential at the higher levels. A strike must be delivered with speed and accuracy, and with fa jing, or explosive power, while remaining soft. The transition from soft to hard and back is one of the hardest aspects of the fan to learn.

In the Choy Lee Fut manual for steel fan dim-mak, or pressure-point striking, it is stated that when using the fan:

The mind must be coupled with the heart;
The heart with the strength;
The strength with the qi;
The qi with the fan;
The fan with the eyes;
Skill with dexterity.

Obviously, the fan is considered a short weapon. As in many things, the kung fu practitioner takes a seemingly simple household item and makes it into a weapon. In this case, the fighting fan is not much different to an everyday paper fan, except the ribs are made of stainless steel instead of bamboo and the paper is replaced by tough silk.

When carried unopened, no one can tell it is a weapon. Even when opened and used to fan oneself cool, it looks like an ordinary fan to anyone but the most aware. However, once in the hands of a trained expert, the fighting fan is deadly.

The steel ribs can be used to block and deflect attacks from an opponent, even attacks from other weapons. With the fan closed it can be used against the forearm as an iron bridge, or from the fist for grappling and trapping (chin-na) techniques. Also when closed, it can be used to stab at the vital points of your opponent. The end of each steel rib is sharpened like a knife blade, making the closed fan a dangerous stabbing weapon.

When the fan is snapped open, those sharpened edges become a slicing blade and, combined with well-trained forms of attack in all directions, the slice can be horizontal, vertical or diagonal at any level and gate. The fan is snapped open and closed, switching quickly between a hard and a soft weapon. The hardened silk snaps loudly when the fan is opened, to shock and distract your opponent. The opened fan can be used as a shield to mask forthcoming attacks. As well as stabbing, trapping and slicing, a practitioner can use the opened fan to strike and blind the opponent.

While both deadly and seemingly innocuous, the fan is favoured by scholar martial artists. Master Chen Yong Faâ€™s grandfather, Master Chen Yiu Chi, favoured the fan as his preferred weapon and was known to carry one at all times.

The fan is considered an internal, tertiary (high-level) weapon. There are three main fan forms in the Choy Lee Fut system:

Hopefully, during our seminar in June, we can at least learn something of the nature of this unexpectedly potent weapon of the Choy Lee Fut style.